Thanksgiving
Thankful for the Past and the Present
​
​

"Wear gratitude like a cloak, and it will feed every corner of your life."

For many reasons, Thanksgiving has always been a favorite time of year for many. The season of fall is upon the Midwest causing the leaves to turn beautiful fireball colors. You quickly grab a sweater as you go out the door due to cooler temperatures, where you are greeted with the smell of fireplaces burning in your neighborhood. Most important...traditions that will be passed on are being made. That's what makes holidays so special, it's a blending of traditions handed down mingled with new traditions (and family members) being added each year.

The rest of the story.
According to the US National Archives, in 1939 with the last Thursday in November falling on the last day of the month, President Roosevelt became concerned that the shortened Christmas shopping season might dampen economic recovery. President Roosevelt issued a Presidential Proclamation moving Thanksgiving to the second Thursday of November. Thirty-two states issued similar proclamations, but 16 states refused to accept the change. As a result, for two years two days were celebrated as Thanksgiving in the United States. Finally, Congress brought an end to the confusion in 1941 and declared the last Thursday of November as the Thanksgiving holiday.

Thanksgiving has been celebrated in America since 1789. It's interesting to think of our ancestors celebrating this holiday over 200 years ago. I wonder how many long standing traditions families have that existed all the way back then. Our family started a tradition four years ago after my mom passed away...a Thankful Jar. The past four years, our family has written down what they are thankful for and put our hand penned notes in the jar. Each year, we empty the jar and read all the notes. It's been fun watching the grandchildren's thankful notes change. Some of their early thankful notes are funny. It will be interesting over the next several years to continue this new tradition. This newer tradition has become a highlight each year. 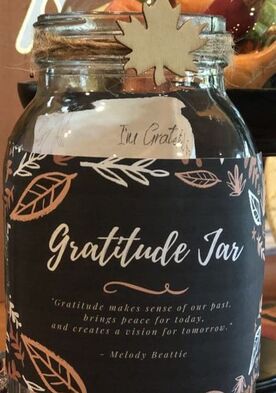 My mom always set a festive Thanksgiving table, complete with place cards. I always thought it looked like so much work...for a few days before the actual meal. Getting all the food, unthawing the turkey, folding cloth napkins, making sure the water goblets didn't have spots., the preparation list seemed endless. I've realized as I have gotten older...part of the joy of Thanksgiving was in the preparation, the planning, the anticipation of a good meal shared with close friends and family members. Our table was filled with food, laughter, and love. We were truly blessed to have enough to share, a home to share it in, and while we were certainly not perfect...we loved each other.

Let's take a journey.
Let's take a journey back to some Thanksgiving's long ago. At our house on Thanksgiving Day, the TV was allowed in the morning for the Macy's Day Parade...then it was off for the day. Macy’s began their now iconic Thanksgiving Day parade in 1924. The first parade was organized by the department store’s president, Herbert Strauss. The first parade was a six-mile procession from Harlem to the Macy’s store in Herald Square, featuring animals – including elephants – from the Central Park Zoo, and was nearly three times as long as it is today. Television filming in later years reduced the route. The Macy's Day Parade is a tradition that continues to this day, soon celebrating 100 years of the Thanksgiving Day Parade.

The vintage ads from magazines show a much less rushed family than today's families, preparing for Thanksgiving. It's so fun to have a look back at these early ads and relive days that many of us are too young to remember.
These vintage ads bring such a nostalgic feel as we approach Thanksgiving 2021. Another tradition for many was watching A Charlie Brown Thanksgiving. We remember how nice Charlie Brown's grandmother was when she invited Charlie Brown and all of his friends to Thanksgiving dinner and they happily sing in the old family station wagon as they drive off. 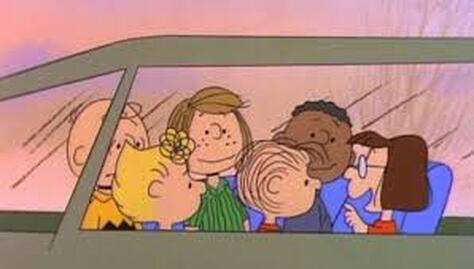 While turkey is the bird of choice for Thanksgiving dinners across the United States today, according to US History.com, deer was what the colonists enjoyed. Venison has been replaced by turkey in most homes throughout America today.

A strange tradition.
Each Thanksgiving, the president of the United States ‘pardons’ a hand-selected turkey, sending it to a farm where it lives out the rest of its days. Many people believe that, President George HW Bush was the first President to grant such a pardon in 1989. But that's not accurate.

According to the White House, the tradition dates to Abraham Lincoln’s days, when his son Tad begged him to write a presidential pardon for the bird meant for the family’s Christmas table, arguing it had as much a right to live as anyone. Lincoln complied, and the turkey lived. Hence...a tradition is born.

Thankful.
Thanksgiving brings so many memories for people. Sadly, not all of them are good ones. That's what is truly wonderful about traditions...they can be started any time. Start a Thanksgiving tradition this year. Thanksgiving is a time to reflect and be reminded of all of God's provision (like George Washington's proclamation states...click here to read the original proclamation) through the year. Thanksgiving should be the culmination of showing gratitude with our heart, and not just one day to eat stuff ourselves on turkey and be thankful. Hopefully, we can be intentional and find something every day to be thankful for. Even something small...like seeing one beautiful fall leaf shimmering in the sun. There's always something to make your heart happy.