My Battle with ALS
​By Leslie Krummel
By Lesley Krummel

In Weakness I am Strong.

I have always been a very independent person. I was never one to ask for help. It drove my Grandma Frannie crazy! My Aunt Deb always called me the energizer bunny. This was true for most of my life until May 15, 2018. That is the day I got the diagnosis that I had already figured out on my own. ALS. Lou Gehrig’s disease. Amyotrophic lateral sclerosis. An always fatal, vicious, relentless disease of the neuromuscular system.

It was like a punch in the gut. But also, a relief. After a year and a half of doctor’s appointments and test after test, I had a name for what was happening to my body. As scary as it was to finally know what I was fighting against, at least now I could fight. 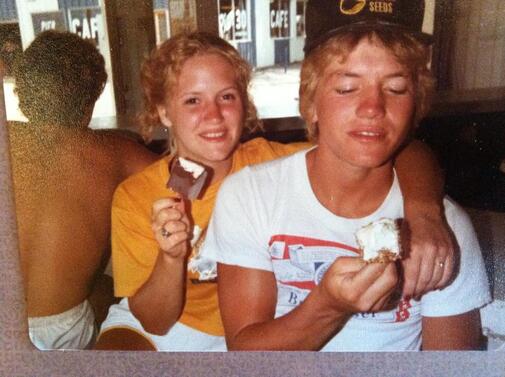 The early years, Lesley and husband in high school in 1980.
I have always felt like I had a strong faith. I had Jesus in my life and in my heart. Boy did He prove that He is in fact in my life. I have been involved in our church since I married my husband 40 years ago. We raised our three children in the church and were very active and served in any way we could. But, since being diagnosed with ALS, I have felt my faith grow and grow. I had never written anything before. The first thing I did was start a group on Facebook, for no other reason than support. I felt I needed to have the support of others during this journey. Little did I know, God was using this time to use me, to reach others and to give them support. My little group got bigger and bigger and friends added friends. It was amazing to see as much support as I was getting. Friends started telling me how much the group meant to them. How much it has helped them in rough times. I was a little shocked.

At the time I was realizing that something very wrong was going on with my body, I was probably the strongest, physically I had ever been in my life. I had gone to Bodypump training at the age of 50 to become an instructor at our local YMCA. It’s funny, I never really thought about the strength I had at that time. I kind of took it for granted. Just like I believe I was taking God for granted. I knew He was there, but I didn’t really put a lot of thought into our relationship. God has a way of waking us up! He also has a way of putting people in our lives when we need them.

My symptoms started so vaguely I really didn’t notice them at first. I would trip once in a while. My flip flop wouldn’t stay on my right foot very well. I was really tired all the time. But I always had excuses for these things. One day when I was getting ready to instruct my class at the YMCA, I was lifting my barbell and it felt heavier than normal. I was lifting weights 5 days a week, so it was very routine, but January of 2017 I noticed a difference in my lifting ability, and it scared me. ​ 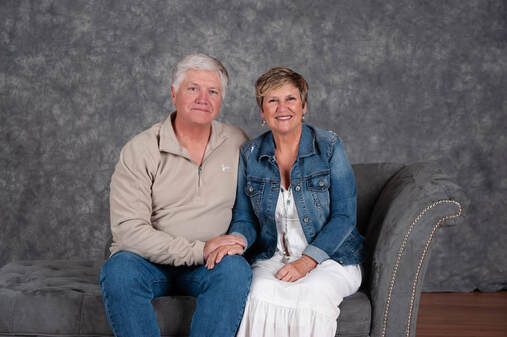 ​As I look back, I realize God was already aligning me with people that would be so important to me. People of a very strong faith, people with very good hearts, and ears. It’s funny how you think you know who will be there for you if times were to get bad, but sometimes we have no idea who God is going to work through. During this time, I was so uncertain of everything. My day to day life was literally turned upside down. Everything revolved around finding a diagnosis and then fighting the monster called ALS. I once referred to this as re-patterning my life. I had a new normal. My life has not been the same since starting this chapter.

As my body is becoming weaker, and things are becoming harder and harder to do, my faith has become stronger and stronger. I can honestly say that I am not afraid. I may feel sad, or frustrated sometimes, but I just remember to lean on Christ.

My ALS is progressing slow so far. When I was diagnosed I was given two to five years to live. I was told there was no treatment, just a couple of drugs that slow it down a little bit. They might give me three to six extra months to live. Really? I had already lost my ability to run and to jump. My balance was horrible and I was very tired all of the time. I can’t describe how tired I was. I was told to try to get into clinical trials. So, I pursued finding trials to get into.

I found a trial call Brainstorm. It was a stem cell study that involved the drug NurOwn. I was approved for the trial and began my monthly trips to Cedar Sinai in LA from Walnut, Iowa. I traveled there for one year. Every trip to LA included a spinal tap. Either to administer my stem cells that had been treated with NurOwn, or to check my spinal fluid and check my progression.

One of the last trips to LA I was sitting on the plane dreading the trip and the treatment. I opened my Facebook page to pass time before taking off, and the love and support that came flowing off of those pages just took over, and I sat in tears on the plane. I was so glad that the gentlemen sitting next to me was sound asleep. I couldn’t hold back the tears. But that moment gave me the strength to get through that doctor’s appointment. I knew God was right there with me. I felt like I could see Him riding on the plane’s wing!

During the year I was in the Brainstorm study, I didn’t progress. I stayed the same, and my Neurologist even said that he felt I got a little stronger. But, when the trial was done, I could no longer receive the treatment. The drug NurOwn was not approved so I was no longer able to get it. I was hoping and praying that maybe I had enough NurOwn to keep me strong. But after awhile I realized this wasn’t the case.

Two years have passed since doing the trial. I am now completely dependent on a walker in the house and use a power wheelchair outside of my home. I have had three broken ribs, a broken wrist and many bumps and bruises from the many falls I have taken. My balance is completely gone. I can’t bend over and pick up my grandkids. (We have
been blessed with 10 beautiful grandkids and one on the way along with one great grandchild.) I can’t really cook or clean anymore. It takes way too much energy to stay upright let alone try to cook or mop. I was always very athletic and loved to snow ski, water ski, exercise, play with the grandkids, golf, swim and the list goes on and on. I am no longer able to do any of those things.

As I mentioned earlier, I have had to learn how to re-pattern my life. Make adjustments. ALS seems to be affecting my right side worse than the left, so I have learned how to do things left-handed. Instead of picking up my littlest granddaughter while standing up, she knows that I need to sit down before I can pick her up. I am blessed to have a van that I can get in and drive while in my power wheelchair. I am still here 5 years after noticing the first symptoms of ALS. I’d say that is pretty good!

I can’t help but think that God uses us in certain situations. And I firmly believe that He is using me now. I could be bitter and angry. I could be sad and not want to participate in life. But I have never felt that way. I feel like I need to make a difference while I can. Whether it be to participate in a clinical trial or be an advocate for funding, to fight for the rights of people with ALS, to speak at a woman’s conference or on a Youtube channel for No More Excuses, I have a mission. I’m not done yet. And God is giving me the strength to keep going.

“I can do all things through Christ who strengthens me.” Philippians 4:13 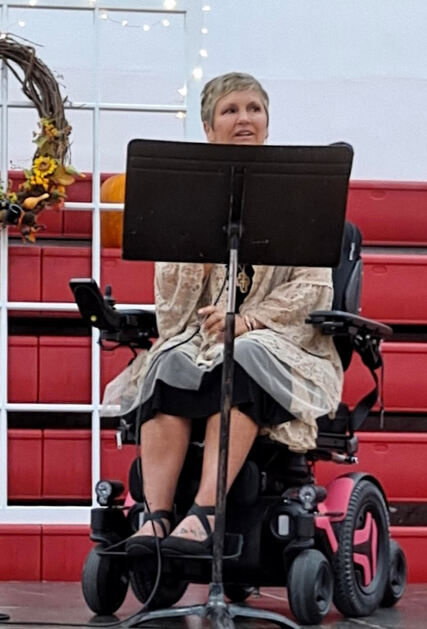 Lesley speaking in September 2021 at The Notebook Cafe Women's Conference in Walnut, Iowa
While I was posting my daily adventures on my Facebook page, “Faith and Friends” I was asked many times to put my posts into a book and God blessed me to have the opportunity to do so. I have written two books, “Fight Like a Girl, My Battle With ALS” and “Still Fighting, My Journey with ALS”. If you would like to purchase either of these books, you can email me at lmkrummel@yahoo.com and I will send them to you. 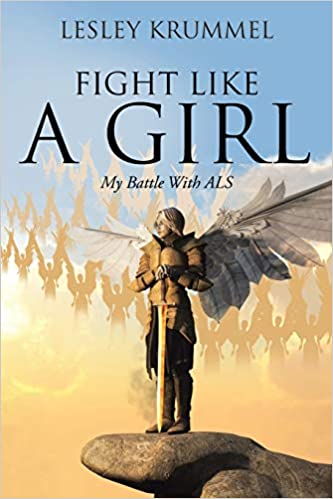 Lesley's first book, Fight Like a Girl
To be an advocate for ALS you can do so by getting on the ALS Association Iowa Chapter Facebook page and ask to be an advocate. It is so easy, the letters are written and you just need to hit the “take action” button and the letter is sent to whoever we are trying to send a message to. So simple and so effective. We recently rallied together and helped get a grassroots bill passed through the House and the Senate called ACT for ALS. A very big and exciting jump in the right direction for people with ALS to have a say in their treatment.

While God is using me, I will keep fighting. If not for my benefit, then for those who will be battling ALS in the future. I pray that a cure is found soon, so no one else will have to go through this.

But he said to me, “My grace is sufficient for you, for my power is made perfect in weakness.” Therefore, I will boast all the more gladly about my weaknesses, so that in Christ’s power may rest on me. That is why, for Christ’s sake, I delight in weaknesses, in insults, in hardships, in persecutions, in difficulties. For when I am weak, then I am strong. 2 Corinthians 12:9-11

Click here to watch Lesley's interview on ALS NUROWN Trial #14 on No More Excuses. ​
About the author
Lesley will have been married for 40 years to her high school sweetheart Jan. 9, 2022.  They have 3 wonderful children, 3 children in-law and 10 grandchildren, 1 great grandchild, and another grandchild arriving in June. Lesley and her husband farm and own a trucking company.  They have had to relocate and downsize from the farm and now call Avoca, Iowa their home.  Lesley loves to cross stitch and do crafty things. She also loves exercising and was an instructor at the Atlantic, IA, YMCA.  Her other interests include being outdoors, boating, snow skiing, working in the yard, swimming, playing with the grandkids, and going for walks. Unfortunately, Lesley now cannot do these things. She also spends time reading and writing about her journey with ALS.  Lesley studies the Bible and enjoys time with her Bible Study gals.  Spending time with family and friends is a priority for Lesley. Lesley has been a huge advocate for ALS and the advancement in treatment. Her life was dramatically altered when she was diagnosed with ALS on May 15, 2018. She was given 2 - 5 years to live. Research with ALS treatments will hopefully advance quickly giving her the opportunity to see many more years. She knows, it's in God's hands. Her faith is amazing and has changed the lives of many people.