In 'From the Editor', I wrote about the in-between of the before and after photos. So now, let me take you behind the scenes to the in-between process that transformed our historic 1875 bank vault from a space that was starting to become dilapidated and even decaying, to an enchanting special place for two now called Esther's Tea Room. ​ 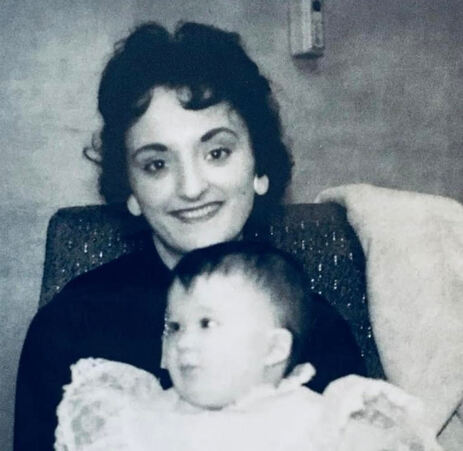 The Esther of 'Esther's Tea Room'. This is my mom, Esther, and me at Easter 1960.
Often my ideas quickly snowball. This one was no exception.  I wish I could see behind an episode of Fixer Upper, or another design show and see all the problems they encounter. One big difference...they have a team, I have a husband. He's talented and a hard worker, but he can't do the work of 5 people.

​Before becoming Esther's Tea Room, the vault was used to house items that were for sale as part of our shop, Millie McKeever's Vintage & Home Decor. There was quite a lot of things tucked in there. As we began to move items out, in preparation for what we thought was just painting the high cathedral ceiling, little by little...we began to see all the damage that was hidden behind the small furniture pieces against the walls and also under the large rug that covered the floor. It was an unplanned...and unpleasant...surprise. The picture below is what we found.

Prepare for the unexpected.  With any restoration or remodel project, even the small ones...prepare for the unexpected. You will most likely encounter something unexpected, even if it's the only paint color you wanted is on back order for 6 weeks. So be ready for some surprises along the way, be prepared to take a breather and decide the best course of action. I felt my heart sink when everything was removed from the vault and it showed damage to the walls and ceiling, then came the floor, with it's cement/clay type foundation literally starting to crumble. My husband immediately begin to make a plan to repair the walls. Some of the cracks were actually allowing cement to crumble through the 147-year-old 18" thick vault walls. The floor damage was superficial.

Hold your resolve.  With more work than we anticipated, we quickly came up with plans to address the issues we uncovered. It would have been easy to feel a little overwhelmed, but with a plan in place...and things in complete disarray...we forged ahead. This is the part where I personally feel you have to give yourself a little pep talk and look around at the small things that you accomplish. Keep your focus on what you are getting completed, instead of everything that is uncompleted. You will get there, just hold your resolve and keep patting yourself (and your spouse or helpers) on the back for the great job as things get done. Relish in those small steps forward!

Take breaks. I know this sounds kind of silly to put this 'tip' in, but I find that when I am forging ahead...it's easy to get so focused on all the tasks I am doing, that I will forget to drink or eat. I would rather get something done then stop for 30 minutes for a meal. I've learned that first, I get cranky with no food and no breaks; second, my work is not as good if I am getting tired and hungry. That is ALWAYS the time when a mistake will be made, or I see that my paint lines get sloppy. So, my advice...take time to eat and drink water during the renovations. It's worth it. I'll often set my phone for a two hour break, and I stick to it.

Dream. As the project is coming together, allow yourself the opportunity to let your heart be inspired and dream during all the work phase. So many times your idea will take a different shape, or you'll realize something you want to add or do differently during the process. Don't focus strictly on the work, but look around as things are coming together and let the project itself give you ideas...you'll love the results and you'll surprise yourself with the difference of what your original idea was and how the completed project turns out.

My inspiration for Esther's Tea Room.  I knew when we started working on the old bank vault that I wanted it to be a tea room. My inspiration was giving visitors who stop in our shop a unique experience that they wouldn't get anywhere else. When I visit places, I love doing things that I can't normally do. As a person who loves historical old buildings, I personally would love it if I visited someplace and the 147-year-old bank vault was someplace I could actually sit in and take in the history of the space while enjoying a cup of tea (or coffee). That was my inspiration..to offer visitors something that would speak to their heart. As we were finishing this project up...I remembered seeing my mom sitting on those vault steps marking items for her 'shop' inside the vault when we first opened in 2004. All of the sudden...the nameless tea room...looking so charming...had a name...Esther's Tea Room, named after my mom. That's what I mean when I say let the project speak to you as it unfolds. Don't get so caught up in the work, that you miss some of the things that will be the best parts of the finished project.

The result. I'll let the photos of Esther's Tea Room' show you everything that I shared in this article. It turned out better than I could have asked and having it named after my mom...was just icing on the cake. Literally, the cupcake...we have an amazing bakery, Frosting, Inc. just a few feet away from 'Esther's Tea Room'. It's someplace that visitors will remember for a long time after they have left Walnut.

​
Welcome to...Esther's Tea Room
Thank you for stopping by 'Esther's Tea Room'. You can reserve this space, no charge...by calling 515-745-0476, or email at thecafe@thenotebookcafe.com
Click here for Next Page
Click here to go back